A fire gutted down at least 4 to 5 huts in Dimakuchi daily market on Tuesday afternoon. The fire broke out  from a lighted cigarete and quickly spread to the other houses in the neighbourhood. Fire fighters from Dimakuchi and Tangla were rushed to the market and they quickly doused the fire.There was no report of any casualty or injury.The exact loss of property and its value was yet to be ascertained, sources added. 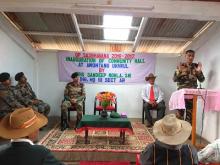 1 Aug 2016 - 7:43pm | AT Kokrajhar Bureau
A medical civic action programme was conducted by SSB and civil Doctors at Dadgiri weekly market along Indo Bhutan border on Monday in Chirang district. It was organised to provide medical aid...

19 Apr 2015 - 5:14pm | AT News
One person was killed and many houses were ravaged when a powerful storm hit Lakhimpur district on Sunday. The storm began at 4.30 in the wee hours damaging over 200 houses apart from disrupting...