Patriotic People’s Front Assam (PPFA) has hailed the initiative to raise the national flag in Jawaharlal Nehru University premises prominently as it would help erasing the unwanted impression about the prestigious institute in New Delhi that it had virtually turned into a hotbed for anti-India activities.

The Assam based patriotic forum also expressed hope that all other Indian Central Universities would fly the national tri-colour with due dignities.

Earlier the PPFA expressed shocks that a section of JNU students intentionally indulged in anti-national activities terming the execution of Afzal Guru on 9 February 2013 a ‘judicial killing’ and resolving to fight dividing India into thousand parts.

The participating JNU students organized the meeting on 9 February to commemorate the execution of Guru, who was punished for his involvement in 2001 Indian Parliament attack after exhausted judicial process. They also organized another commemorative meeting next day at Press Club of India in New Delhi, where too anti-India slogans were raised.

Underlining the importance of elevating the tri-colour, the PPFA argued that the national flag symbolizes the immense sacrifice made by millions of known & unknown freedom fighters to make India an independent nation and every responsible citizen should salute the tri-colour.

“It has been observed that separatist elements and so-called intellectuals of the country have long been opposing the hoisting of tri-colour citing their grievances against the Union government in New Delhi. They must understand that the national flag simply does not belonged to the government agencies alone, rather it is owned by every Indian national,” said a statement issued by PPFA.

12 Nov 2012 - 12:31am | Ritupallab Saikia
At the time when the state health department has been making tall claim regarding revolutionary progress in the health sector, ironically an expected mother had to give birth to a Stillbirth child... 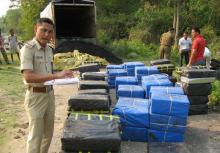 7 Apr 2011 - 4:11am | Ritupallab Saikia
Numaligarh Police and ASRF, acting on a tip-off on Wednesday morning at around 5.30 am, recovered 200 kg of GANJA valuing over crore in the international market from a truck bearing registration No....