Kaziranga Wildlife Society has expressed deep anguish over the serial poaching of Rhinos in the Kaziranga National Park. The Society condemned in strong words the inability of the forest department to check the poaching of Rhinos in their natural adobe as well as the government’s indifference to any effective policy making to protect the state’s wildlife and their habitat.

In a Press Meet held on Saturday at the Guwahati Press Club, the members of KWS held the Chief Wildlife warden of the state responsible for the, plight of rare species. Since 2012 more than 150 Rhinos fell prey to the bullet of poachers. Most of the poaching being taken place in Kaziranga once known as the most well managed park. At the same time death incidents of elephants, another species protected under the scheduled-I category, has doubled which is another cause of concern.

Compared to the earlier years, incidents of killing of rhinos in Kaziranga came down after an Intelligence Cell was put into place. Conservation NGOS have always pointed out intelligent failure in curbing rhino poaching in Kazaringa National Park. The Cell, constituted vide Govt of Assam notification No. FRW. 6/2015/2 dtd. Dispur the 17th March, 2015, was sent to Kaziranga and was taken as a very timely and positive move by the department to thwart the challenges of poaching of the unicornis. This action proved beneficial as there was a lull in poaching activities once the cell started operating .The people of the state also heaved a sigh of relief as no poaching was reported during those months--from May to July. Sadly, the Cell was called back after a few months. The moment the Cell was withdrawn from KNP, the menace of poaching showed its ugly head once again. It is noteworthy to mention that in the Intelligence Cell’s report many things came to the fore--most surprisingly-- involvement of a few forest personnel in poaching activities.

The KWS therefore strongly demand the government to reinstate the Intelligence Cell in Kaziranga with immediate effect. The KWS secretary Mubina Akhtar maintained that the Chief Minister who is also the Chairman of the State Wildlife Advisory Board has already ordered to reinstate the Cell but for reasons best known to the department the order is yet to be implemented.

The KWS also appeals to the government to conclude all formalities at once in raising a well equipped rhino protection force. Taking a dig at the selection procedure of forest personnel, especially frontline staff, the Society maintained that the selection procedure should be free from all kind of political influence for the greater sake of conservation of state’s wildlife.

The Society also appeals to the forest department to introduce a toll free number as ‘early warning system’ or ‘poaching alert’ and carry out massive awareness campaigns in fringe areas of sanctuaries and National Parks with the help of wildlife NGO’s. 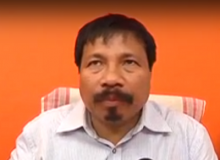 4 Jan 2017 - 8:09pm | AT News
Shankardev Shishu Vidya Niketan School at Dadara near Hajo is ready to get another facelift with the financial support from Guwahati Round Table 235, the Guwahati chapter of Round Table India (www....

13 May 2012 - 2:11am | editor
Union home minister P Chidambaram said that the boundary dispute between Arunachal Pradesh and Assam would be resolved amicably soon. Talking to reporter during his visit to Itanagar on Saturday, he...