Lifer for 4 by Udalguri Court

The District and Sessions court of Udalguri on Friday sentenced four persons, including a women who were accused in a murder of a farmer at Dimakuchi under Panery police station in Udalguri district. The four accused are Nagen Deka,Gahin Deka,Sarat Deka and Pranita Deka,who severely beat one Sukeswar Medhi a farmer at his paddy field way back on July 4 in 2007 leading to his death.

Ritamoni Medhi wife of the deceased lodged an FIR at the then Dimakuchi police outpost and a case was registered under Panery PS. The court headed by district and Sessions judge AK Borah came out with a verdict on Friday and sentenced the four accused with life imprisonment under sections 147/447/325/302 of the IPC.

AGP, BJP last to be announce on Thursday

4 Mar 2009 - 8:05pm | editor
The Asom Gana Parishad and BJP have deferred the seat sharing deal on Wednesday due to the absence of Assam BJP leader Mison Ranjan Das. Das failed to make as his brother died in the morning.... 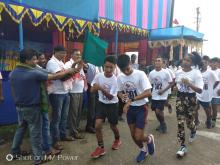