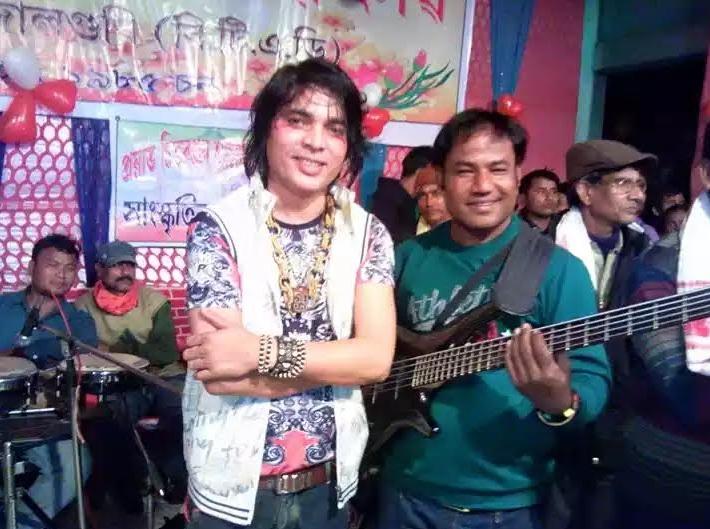 Popular singer Kumar Bhabesh performed at a cultural night in Kalaigaon on Sunday night. An artiste who sings from the heart, Kumar Bhabesh has won over the heart of each and every Assamese through his mesmerizing singing. His songs have captured the heart and mind of his audiences. Since his debut with ‘Pori’ he has made more than 70 Assamese albums. His noted Assamese albums are ‘Puwa’, ‘Pratisruti’, ‘Dehajaan’, ‘Jeuti’, ‘Sonpahi’, ‘Jonak’, ‘Kamrupiya Chowali’, ‘Roja’, ‘Ruksana’, ‘Maijaan’ etc. He sang number of his hit songs including his popular song ‘Najaba najaba xun muke eri thoi’ from the album ‘Dehajaan’.

Kumar Bhabesh, who has already sung more than 250 songs in various languages, made his foray in Bhojpuri music for the first time. He always showed great curiosity and interest in diverse styles of music, although folk remains his real love. His first Bhojpuri album ‘Khatiya Hilela’, made in both audio–video formats, broke huge not only in UP, Bihar, Assam but in other parts of the country as well.

14 Oct 2018 - 11:52pm | AT News Guwahati
GUWAHATI: The Kamrup Police have arrested three persons in connection with the murder of senior State Bank India (SBI) official Junu Sarma.Police in a pre-dawn raid on Sunday arrested the...