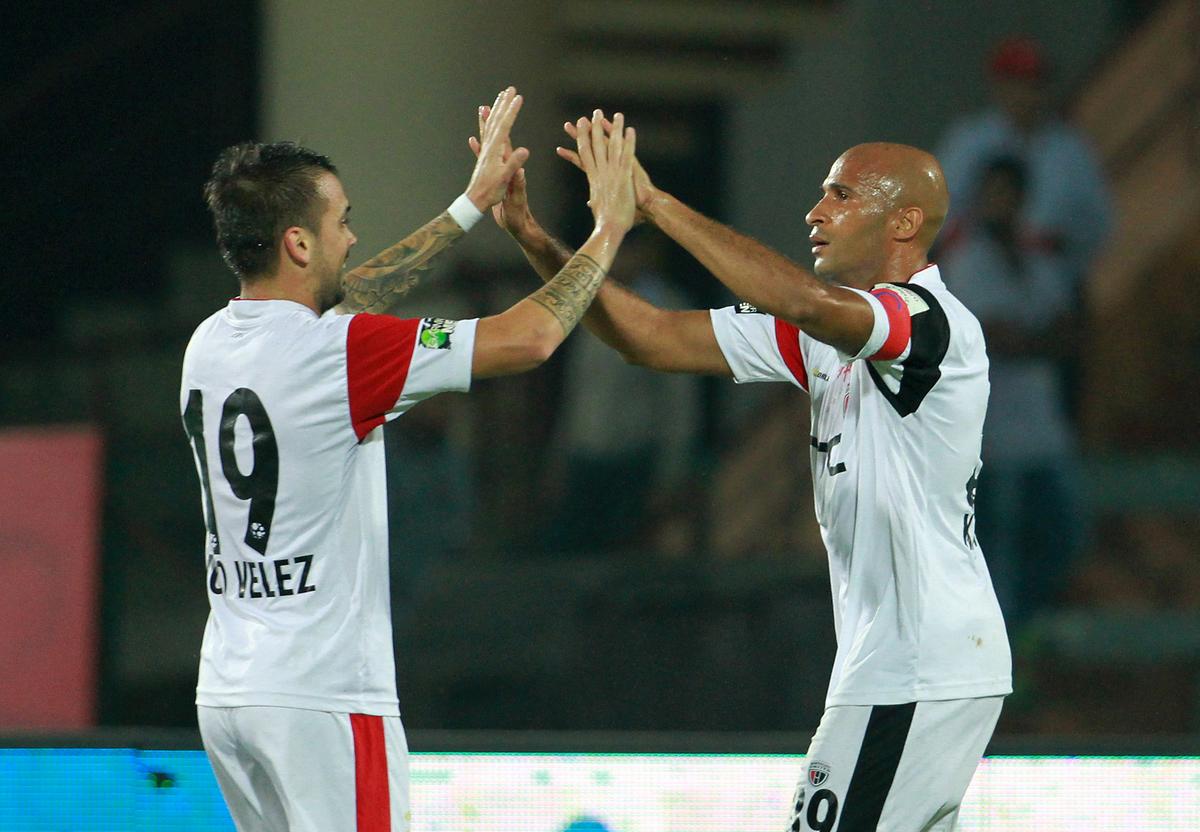 In a fast-paced clash for a place in the semifinals, NorthEast United did well to hammer three past FC Pune City in the first half with goals from Nicolas Velez (4th minute), Diomansy Kamara (18th minute) and Andre Bikey (43rd minute). FC Pune City had briefly fought their way back into this game with a goal from James Bailey (8th minute) to tie the  match at 1-1 but then surrendered ground to the hosts.

Adrian Mutu pulled another goal back for Pune City with four minutes left on the clock but eventually ran out of time.

The victory took NorthEast United to the fourth spot with 20 points. They have now completed their league engagements and will only qualify if FC Pune City defeat Chennaiyin FC in their concluding league clash. Chennaiyin FC are placed fifth with 19 points and will qualify with a draw against Pune City, thanks to their superior goal average of plus nine.

FC Pune City needed to win both their matches and are now out of the competition for knock out stage.

NorthEast United started the match in roaring fashion with Velez giving his team the lead in the fourth minute. It all started from NorthEast United’s own half with Didier Zokoro losing the ball to Bruno Arias. The midfielder ran quite some distance with the ball and found Mendy, whose first touch was disappointing, but still managed to pull the ball back for Velez who did the rest despite having three defenders ahead of him.

Pune City fought their way back just four minutes later. Jackichand Singh played the ball for Zokoro just outside the box and the highest capped player for Ivory Coast relayed the ball for Bailey, who did well to curl it past NorthEast goalkeeper TP Rehenesh.

NorthEast regained their lead in the 18th minute from a quick counter-attack. Mendy found Velez who crossed across the face of goal where Kamara found space and time at the far post to tap the ball into an empty net.

It seemed to be curtains for Pune City in the 43rd minute when Bikey jumped high enough to head home a free-kick from Bruno with Pune goalkeeper Arindam Bhattacharya completely missing the ball.

In the second session, FC Pune City stepped up their attack and pressed more men forward but the visitors had nothing to show apart from a trademark Adrian Mutu free-kick in the 86th minute. The goal did not make much of a difference as NorthEast defended their lead to stay alive in the league.

FC Pune City, who led the ISL table at the start, ended their league engagements without a single away win.

4 Mar 2008 - 6:13am | editor
The Archeological Survey of India is all set to take Oil and Natural Gas Corporation to the court for the cracks at the historic Rongghar. According to information, the legal the ASI will finalise...

18 Sep 2014 - 9:33pm | AT News
Police on Thursday seized two licensed revolvers from Shankar Baruah’s residence a day after the former DGP shot himself dead. According to police who carried out formal investigation on Thursday...