The Supreme Court on Friday refused to accept the bail plea of Matang Sinh saying that the Union minister is known for his contact.

A division bench of the top court consisting of Justice T S Thakur and V Gopala Gowda said that there was no ground for Sinh to get bail at this stage where the crucial investigations have yet to be completed.

The refusal of the division bench forced Sinh's counsel Harin Raval to withdraw the petition. CBI nabbed Sinh him on January 31 this year even after he managed Anil Goswami, the home secretary who has to put in papers.

16 Sep 2010 - 4:49am | editor
Sensation prevails in Golaghat district of upper Assam when Nagaland policemen thrashed a group of school girls on Wednesday. The incident took place at around 9 in the morning as the policemen beat... 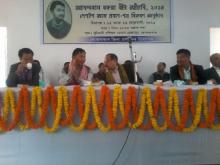