Gogoi questioned the government’s efficiency to rein in the hoarders and blackmarketers. He said, "today, the hoarders and blackmarketers are having a field day and the common man has been hit hard as pulses constitute their staple meal." The chief minister observed, "the central government's insensitivity towards the common man has been exposed by its total failure to keep the prices of pulses under check."

9 Nov 2010 - 4:05pm | editor
The death toll in NDFB strike mounts to 19 with reports of two other incidents in Majbat and Karbi Anglong districts on Monday night. The militants gunned down two persons in Majbat area in... 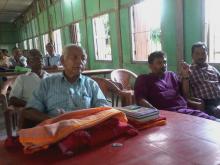 14 Jun 2016 - 5:48pm | AT Kokrajhar Bureau
Over hundred poets from different parts of Kokrajhar and Chirang district participated and recite their self compose poems on the occasion of 12th Foundation Day celebration of ‘Pithika’ on Sunday...