Assam Sahitya Sbaha president Dr Dhrubajyoti Bora received the Syed Abdul Malik award at a function in Golaghat on Sunday. Instituted by the Golaghat branch of Asom Sahitya Sabha, the award was given away to Dr Bora for his novel Swargadopi dealing with the life and contribution of Biju Vaishnav, the martyr of the independence struggle hailing from the Numaligarh tea garden area.

Several prominent persons attended the function at the Amateur Theatre Hall in Golaghat. 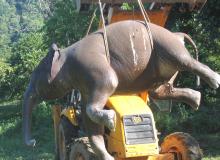 5 Feb 2008 - 1:45pm | editor
The ASDC has rushed an eight member delegation to New Delhi on Tuesday to reiterate the demand for an autonomous state covering both North Cachar and Karbi Anglong districts. The demand came up in...

26 Feb 2010 - 12:21pm | mridulburagohain
Nehru Yuva Kendra, Sivasagar district unit, with support from Ministry of Sports and Youth Affairs, has been organised a National Integration Camp at Demow Rajsai stadium from February 23. The event...