Police have arrested Rubul Ali two days after he along with his associate raped a minor girl inside their bus on Sunday.

Rubul was picked up from Baihata Chariali during an intensified operation after thousands of people hit the streets demanding immediate arrest of the culprits involved in it.

Another accused Arsed Ali has been absconding.  The raped the 13 year girl inside the bus after it arrived in Goreswar from Guwahati. Local residents on Monday morning rescued her when she tried to escape the perpetrators. 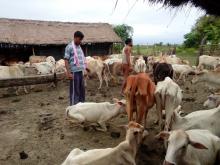 28 Jan 2014 - 11:38am | AT News
A powerful grenade explosion has left one person injured in Sivasagar town on Tuesday.The explosion took place at a house in Station Chariali at around 11 in the morning. Identified as Raju Ali, the...