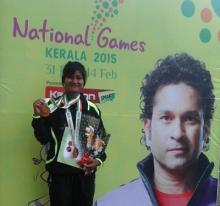 4 Apr 2017 - 11:19pm | AT Kokrajhar Bureau
National archer gold medalist Gohela Boro has been battling with life at her New Amguri residence due to financial hardship, who has been suffering from serious diseases since few months. She...

Community Hall inaugurated and cycles distributed to girls at Tangla