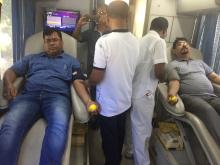 26 Feb 2014 - 2:05pm | AT News
Congress vice president Rahul Gandhi pulled huge crowd when he was holding a huge road show in Nagaon on Wednesday.Immediately after returning from Uriamgaon and Samoguri areas, the Nehru-Gandhi...

16 Apr 2014 - 7:25pm | AT News
A pall of gloom descends Congress party in rank and file following the sudden death of Dinesh Prasad Goala.The Lakhipur MLA and former minister passed away at Medanta - The Medicity hospital in...