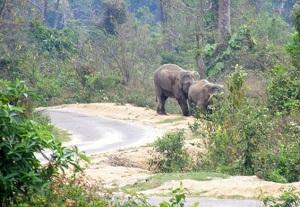 A huge herd of wild elephants unleashed no less reign of terror in Majuli destroying crops and damaging property on Wednesday night.

At least 200 elephants came down to the river island in the evening and started destroying crops and vegetables in Nayabazar along with 20 other adjacent villages while some others damaged houses and properties forcing the villagers to flee.

Forest officials found it quite difficult to control the herd of wild elephants. They resorted to blank firing and burst of fire crackers. But of no avail.

Only in the wee hours, the entire herd of elephants vanished. The panic stricken villagers apprehend that the elephants might visit further again.

17 Sep 2015 - 10:05am | AT News
An unidentified object hovering around the sky in upper Assam pulled no less spell of curiosity among lakhs of people on Wednesday evening.Much to the utter surprise and curiosity, the comet like...

Still India is in Endosulfan love

4 Sep 2010 - 9:26pm | editor
Endosulfan –‘the secret killer’ is still active in India whereas the United States has decided to ban the use of it recently after a lengthy scientific review. It is an inexpensive...

22 Mar 2014 - 1:10pm | AT News
Miscreants from Arunachal Pradesh are still unleashing terror in the Bihali area of Sonitpur district.The miscreants from the neighbouring state on Friday night attacked a buffalo camp in Bihali and...