A slew of steps to ensure sustainable development in the north eastern region struck global attention when human rights organizations from the region raised the issue at the United Nations Human Rights Council Regular Session at Geneva on Wednesday.

The human rights activists hailing from this region stressed involvement of the indigenous people in the extraction of natural resources which, they said, the key to the path of sustainable development.

They further dwelt at length of the impact of the extraction of mineral resources including uranium, oil and gas on the indigenous people in the northeast.

Immanuel Varte who represented CORE from Manipur narrated the impact of the mega development initiatives on the environment which struck the attention of the global leaders.
In her address at the global forum, CENRs convener Mary Beth Sanate outlined the status of women in the region with special focus on women and extractive industries.

This was followed by Narender Kumar’s narration on the country’s legislation on the rights of the indigenous peoples. Kumar who represented IPAC from New Delhi drew no less response from the world leaders.

A brief video documentary on Manipur "Manipur Diary" was screened in the sidelines of the world event. The documentary was produced by CENRs.

This was followed by a lively question and answer session.
…………………

10 Jun 2014 - 3:53pm | Azlina Khanam
The Regional Institute of Science & Technology (RIST), run by the ERD Foundation, Guwahati, has offered a unique facility to poor but meritorious students helping them to pursue their dreams of... 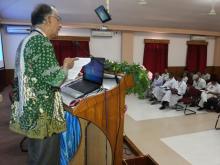