The authorities have restricted water transport services on the Brahmaputra in Nimatighat and Majuli island because of a rising water level of the mighty river.
Official sources told Assam Times that the plying of boats and other vessels after sunset has been banned in other segments of the Brahmaputra.

12 Jul 2015 - 2:12pm | AT News
The Electronic Media Forum Assam (EMFA) has expressed serious concern over the Jorhat district magistrate’s recent order preventing media persons from entering into the DC office without his prior... 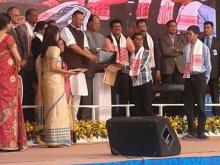 23 Dec 2014 - 3:01pm | AT News
The Assam government starts distributing the Anundoram Barooah Award to the first and high second division holder HSLC examinees from Tuesday. Chief minister Tarun Gogoi gave away the award to the...