Acharjya was accompanied by his wife was felicitated with traditional Aronai in the BTC Assembly House.

He has discussed on various scheme undertaken by council administration and reviewed the implementation schemes in the region.

15 Aug 2015 - 10:01pm | Jintul Talukdar
Altogether seven people including women and children died in a lightening incident in Barpeta sending shockwaves across the state on Saturday.Amid thunder squall the lightening took place on a boat... 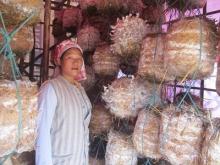 Workshop on mushroom from Apr 19