Prominent markets and malls in Guwahati have stopped sale of maggi hours after the government collected samples in view of the controversial substances in the Nestle products.

“We have stopped sale of maggi. We don’t want to buy any health hazard. We took the decision as soon as the government started collecting samples,” said a manager in Big Bazar.

Tapashi Das, a housewife in Lachitnagar area said, “Who will buy maggi in the face of such a damaging controversy. I myself won’t allow my family members to consum maggi.”

“We will have to look for alternative. There is no dearth of food for tiffin. I will take home made bread as school tiffin,” Azury Saikia told Assam Times in Panbazar.

Notably, chief minister Tarun Gogoi on Wednesday asked the authorities to collect the samples of Nestle products and to prepare a report on it.

He said that the government was likley to restrict the sale of maggi acting on the findings of the report on Thursday. Several states have already resctricted the sale and purchase of maggi in view of the substance controversy.

3 Aug 2015 - 10:24am | AT News
Recovery of three bodies at a public place creates no less sensation in Nagaon district on Monday.The epicenter is Kothiatoli area where local residents spotted three bodies early in the morning... 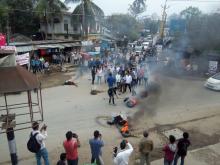