In yet another incident that touches off a seismic wave of shock and anger across the state, a tea garden worker beheaded a minor boy in the name of puja offering to the god before being lynched by mob in Sonitpur district.

The bizzare incident took place at Rongapara area where Nanu Mirdha in the Tarajuli Tea Estate beheaded Sanatan Bag at his residence.

When the shocking news started spreading like wild fire, the local residents in large number raided his residence, dragged him out and lynched him.

Police and para military forces arrived in the spot and brought the situation under control. DC Lalit Gogoi and SP Sanyukta Parashar have been monitoring the situation.

15 May 2016 - 12:33am | AT Kokrajhar Bureau
Road mishap killed two persons and another received serious injury at Dhaligaon National Highway early this morning in Chirang district. The mishap was happened early morning along National Highway... 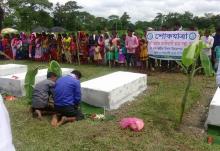