Amid tight security brisk polling is underway in four BTAD district for the 40-member Bodoland Autonomous Council on Wednesday.

An estimated 20,64,099 electorates are expected to exercise their franchise in 2,778 polling booths in Kokrajhar, Chirang, Baksa and Udalguri districts from 7 in the morning.

They would decide the fate of BPF, BPPF, AGP, Congress, AIUDF, PCDR and Left parties.

Poll authorities told Assam Times that 80 companies of security forces have been guarding the entire BTAD areas to ensure free and fair polls. The entire Indo- Bhutan border areas have been sealed to thwart any security threat.

The poll counting would take place on April 11 and re-polling, if any, would be held on April 10

Additional security forces have been deployed in the four districts to ensure there were no incidents of further violence during the polls. The authorities have declared 480 polling stations as very sensitive and over 730 as sensitive.

Altogether 316 candidates were in the fray for the 40 seats and the main contest was likely to be between the ruling Bodoland Peoples' Front (BPF) led by Hagrama Mohilary, the Peoples' Coordination for Democratic Rights, the Sanmilito Jonogoshthiyo Oikyo Mancha and the BJP, which was contesting for the first time in the council polls. 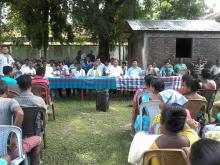