A three day International conference on "Self, World and morality: Schopenhauer and Indian Philosophy with a special reference to the Upanishads ( Oupnek’hat)”   was held at Jawaharlal Nehru University, New Delhi by the Indian Division of Schopenhauer  Society jointly with the Philosophy department of Deshbandhu College in collaboration with the Special Center for Sanskrit Studies, JNU and the Schopenhauer Research Center of the University of Mainz, Germany. On behalf of the distinguished Schopenhauerian scholar Prof. Matthias Kossler, the President of the Schopenhauer Gesellschaft, Dr Lipprandt presented his greetings note on this occasion. 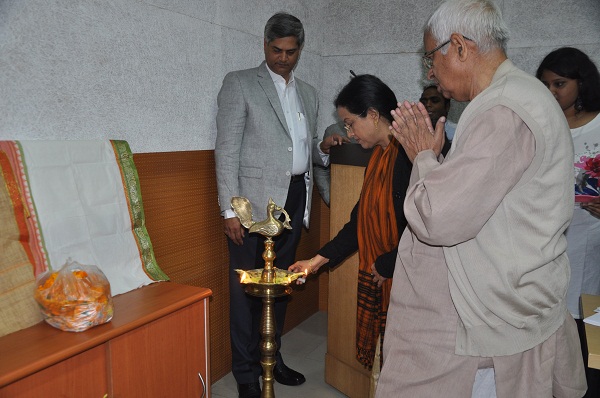 Lighting the lamp of the program by Arati Barua

A large number of foreign scholars from Germany, France and Australia and many scholars from across India assembled at the Convention Centre, JNU during 23-25  Feb 2015 to pay their tribute and respect in memory of the first significant Western Philosopher who carried the wisdom of the Upanishads and the Buddhist ideas to the Western world. Schopenhauer was deeply influenced and overwhelmed by the Indian Philosophical thought and he considered Upanishads "the solace" of his life and “solace of death" too. 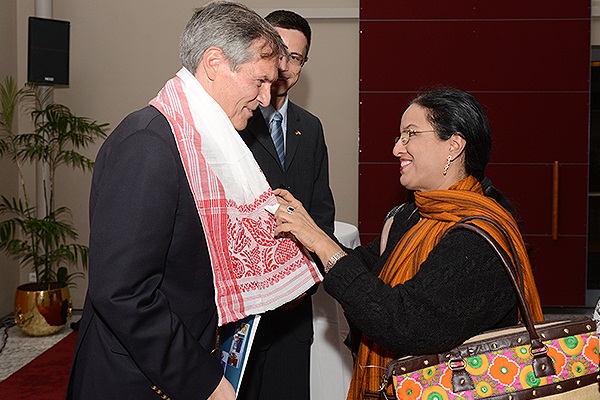 Welcoming the audience, Dr. Aarti Barua, Director of the Indian Division of the Schopenhauer Society, briefly talked about the purpose of the conference and Dr Ramnath Jha  JNU, gave a thematic introduction about the seminar. Inaugurating the seminar, Honorable Prof. S K Sopory , Vice Chancellor, JNU, New Delhi, paid high tribute to Schopenhauer in his inaugural speech. Expressing deep regret that Indian scholars so far have failed to give due recognition to Schopenhauer's contribution in popularizing Indian philosophy in the West, Prof. Sopory highly appreciated the efforts taken by the SCSS and IDSS towards giving due recognition to Schopenhauer. He appreciated that the new generation of Indian scholars have recognized the void and are trying to fill it by creating an awareness about Schopenhauer's contribution amongst us. He said that the bridge Schopenhauer built to connect Indian metaphysics with Western ontology should now be strengthened.

On this occasion a Souvenir of the conference was released by the member secretary of ICPR Prof M P Singh and many distinguished scholars have sent their good wishes for the success of the conference as message for the souvenir. It was a very successful event.

A large number of distinguished participants and students were present to pay respect to Arthur Schopenhauer (1788-1860) on the occasion of his 227th birth anniversary. A special tribute was paid to Schopenhauer by garlanding his photo. Dr. Arati Barua, the chief organizer of the conference on behalf of IDSS and Special Centre for Sanskrit Studies, proposed a vote of thanks. The students chanted slokas from Upanishads  in Sanskrit which had the audience spell bound.

In the valedictory session of the Conference Prof. Shashi Prabha Kumar, V C , Sanschi University of Buddhist-Indic studies, delivered a special lecture . Dr. R N Jha, coordinator of the conference on behalf of Special Centre for Sanskrit Studies, proposed a vote of thanks to all present there.

22 Dec 2011 - 4:38pm | editor
The ruralelectrification scheme has been failing to percolate benefit for the poorpeople living in Assam. This was what came tolight when power minister Pradyut Bordoloi has to faced barrage of...