Protest demonstration in front of GPC

Electronic Media Forum Assam (EMFA) has condemned the incident of arresting agitating media persons from the front of Assam Secretariat on Monday, where they assembled peacefully to protest against the physical mishandling of a lady television reporter on Saturday in Latashil PS and urged the State government to book the culprits under the law.

The EMFA, in a statement issued today to the media houses, also appealed to all media organizations of Assam and northeast India to support the movement. It also requested the city based media persons to join in a demonstration tomorrow (Tuesday) at 11.30 am in front of Guwahati Press Club (GPC).

The television media forum also urged the civil society groups of the region to extend moral support and organize separate programmes according to their convenience.

1 May 2012 - 3:24am | editor
The entire country stands bereaved when over 150 people were feard to have met watery grave on the river Brahmaputra in Dhubri on Monday. Prime minister Dr Manmohan Singh called up chief minister... 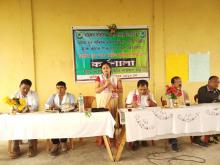