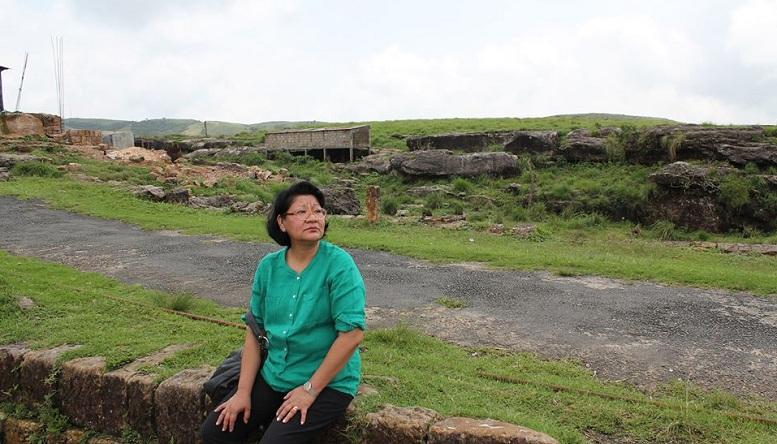 Its all about a book that flutters a circle of powerful people in Nagaland. It is a compilation of six seminar papers presented at various national seminars that find place in the Cogitating for a Better---released in Nagaland on October 25.

On November 9, 2014, the Editor with the Nagaland Page officially received a summons from the Ao Senden, “for writing against the Ao Senden”. The “hearing” was slated for November 11, 2014, at the Ao Senden Office, Mokokchung, Nagaland, at 11 a.m. In the letter served, the Yaongyimsen Village Council was also invited as a witness. Yaongyimsen is the same village to which Monalisa’s husband belongs.

On November 11, 2014, she was accompanied to the Ao Senden Office, at Mokokchung, by members of the Yoangyimsen Village Council, other elders, and citizens of the village. 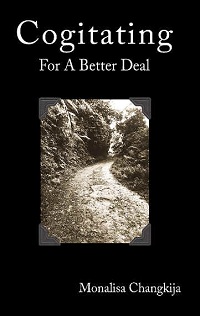 The “hearing” started with a prayer after which about 9 or 10 members of the Ao Senden Presidential Council, including the President spoke. Before the start of the “hearing”, the President, who chaired the “hearing”, was informed that Monalisa does not speak and understand the Ao language.

After all the members of the Ao Senden Presidential Council spoke in Ao, she was informed that their main contention was the following: “… the Ao Senden (Ao Hoho), which is actually just an NGO and has no mandate to arbitrate over intra and/or inter village disputes. Still, the Ao Region IM and the Ao Senden tied up, allegedly after being paid a good sum of money, and expelled Changki village from the Ao community and the Ao Senden.” contained in her paper Consequences of Long Term Conflicts in Northeast India: Impact on Nagaland and Naga Affairs (Cogitating for a Better Deal, published by Heritage Publishing House, Dimapur, 2014, page 25). She was asked two questions by the President in English on as to what basis she wrote the above:

(1) that the Ao Senden is only an NGO with no mandate and (2) what proof does Monalisa carry on the allegation of “a good sum of money” paid to the Ao Region IM and the Ao Senden as mentioned;

Monalisa stood up to answer. At first she thanked them all for the opportunity to meet and then requested the President if a prayer could be said for her by all present there. The President replied that a prayer has already been said. Following this Monalisa said that it was not her intention to hurt anyone’s sentiments by what she wrote and apologized if by doing so she had hurt anyone’s sentiments. She said that it was her opinion on the first question. The President then asked her: “On What basis?” She replied: “On the basis of books written by our elders and on the basis of Government documents”. On the second question, she said: “It is an allegation. I have not accused or alleged anyone of anything.” And then she sat down.

The President and members of the Ao Senden Presidential Council after this spoke further but Monalisa failed to grasp of what was being said because she is not familiar with the Ao language. In between their speeches, a couple of sentences were said in English. One was “The Ao Senden and the NSCN (IM) will take a case against you” and the other was “You are victimizing the Aos”.

Further, in between the speeches rendered by various members of the Ao Senden Presidential Council present there, she was asked the same two questions two more times to which she responded with the same answers. She also said that she reserves the greatest respect for the Ao Senden, as much as for the Naga Hoho and other tribals Hohos, and that these tribal bodies are good for Naga society, adding that what come may, she stands by what she wrote.

The President was of the opinion that what is written in the newspapers doesn’t matter because newspapers are read and discarded but books are preserved for a long time. To this, Monalisa responded that even newspapers of the 16th, 17th and 18th centuries are being preserved till date, as much as books.

The “hearing” continued by several members of the Ao Senden Presidential Council speaking further in Ao till the President gave time to the Yaongyimsen Village Council to speak. The Yaongyimsen Village Council asked permission from the President for a half-an-hour break to discuss among themselves, which was granted. After the lapse of the half-an-hour, everyone returned to the hall and the “hearing” resumed, with the President granting time to the Yaongyimsen Village Council to speak. In the second session, everyone granted permission to speak, spoke in Ao so Monalisa really could not understand as to what was being said. Throughout the second session, she was not asked to speak and so she remained seated and silent. I also did not request time to speak. Since I didn’t what was being said, I couldn’t react or respond. One of the Ao Senden Presidential Council members stood up, while speaking, held up a copy of her book and declared twice or thrice that the book stands banned.

During the second half of the “hearing”, Monalisa’s husband requested some time to say a few words. He was granted time and so on Monalisa’s behalf he said that they are willing to publish the Ao Senden’s refutations and rebuttals to what she had written, which they found to be incorrect/disagreeable/objectionable, in newspapers and insert footnotes in the book itself, as a “conciliatory gesture”. He said “conciliatory gesture” in English. Members of the Yaongyimsen Village Council and the Ao Senden Presidential Council then after spoke simultaneously for a few minutes. Finally, the President stood up and declared the “hearing” as closed.

Everyone stood up to go. Monalisa remained seated till her husband said “Let’s go”. They were then informed that Monalisa would have to sign some paper. They proceeded downstairs to the Ao Senden office where a person took out a computer print-out and Monalisa was asked to sign it. The matter was written in Ao so she asked her husband to translate it. Monalisa refused to sign it because it was written that her husband, on her behalf, has admitted guilt; the book is banned and the case handed over to the Yaongyimsen Village Council for final arbitration.

Monalisa kept on refusing to sign it because her husband did not admit guilt on her behalf but only kept saying that they were willing to publish the Ao Senden’s refutations and rebuttals to what she had written, which they found to be incorrect/disagreeable/objectionable, in newspapers and in the book itself, as a “conciliatory gesture”.

Was it a deliberate twisting of facts or a genuine language communication gap is a matter that calls for examination. Finally she signed the paper because she was informed that the matter has not come to an end as it was referred to the Yaongyimsen Village Council for final arbitration. Moreover, whatever she signed, along with the Chairman of the Yaongyimsen Village Council, was not counter-signed by any members of the Ao Senden.

The next day, on November 12, 2014, the Yaongyimsen Village Council Court summoned Monalisa again. She explained her stand to the Court, after which they discussed something amongst themselves in Ao and finally wrote their verdict in Ao, which basically reiterated what her husband said and that having summoned Monalisa to their Court and after having discussed the matter, declared the case as closed.

In the Afterword of her book, (page 85), she wrote: “I also make no claims to expertise on the issues I have written. I have merely stated my views and opinions, perceptions and perspectives, and as the title of the book suggests, I am merely cogitating on the issues and while doing so, I request you to join me in cogitating on the same issues to arrive at some higher level of understanding of our situations and realities. Perhaps, even to learn more about ourselves. And yes, engage in a dialogue about ourselves, with ourselves. Niketu Iralu’s comments on my essays indicate that a dialogue has already started. Dialogues about us and amongst ourselves, I believe, perform the same function as the little veins and capillaries that keep blood flowing throughout the human body, in a vibrant democracy and enable and empower a society to reach higher levels of maturity. None of us have to agree with each other but as long as we are willing to listen to each other and agree to disagree, our society has a future for discourse. I ardently hope that this collection would provide a glimpse, especially to students, scholars and anyone interested in issues pertaining to the Nagas.”

15 Mar 2012 - 2:33pm | editor
The Centre has sounded alert on Assam a day before ULFA’s Army Day on Friday. A Home Ministry letter on Wednesday has instructed the Assam government to tighten security in the state...

9 Sep 2016 - 7:15am | AT Kokrajhar Bureau
Five persons, including a cadre of NDFB were arrested by Assam police from different places of Chirang district on Thursday during search operation against militant outfit. Acting on specific...