AAMSU all out against Swamy

The All Assam Minority Student Union in burnt the effigy of Dr.Subramoniam Swami in Nazira on Monday in pritest against his vote polarization politics. Apart from burning the BJP leader’s effigy, the AAMSU activists shouted slogans against Dr Sawamy who said that the immigrants must convert to Hindu if they wants to stay in the country.

3 Apr 2014 - 2:50pm | AT News
State chief election officer Vijyandra has firmly ruled out possible manipulation of electronic voting machines in the Lok Sabha voting.Talking to reporters in Guwahati on Thursday, he said that the... 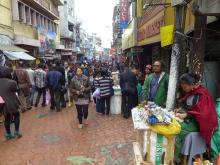 15 Aug 2014 - 11:06am | Rajiv Roy
The entry of outsiders, particularly from across the international border into Meghalaya, and the rest of this region, cannot be curtailed with the aid of Bengal Eastern Frontier Regulation or Inner...