A CRPF jawan was killed at a sudden incident of shoot out inside a CRPF camp in Nagaon district on Monday. The incident took place in the morning inside the Hojai based CRPF camp when Jawan Shivam suddenly started indiscriminate firing at his colleague Ashok Kumar who died on the spot.

Sources told Assam Times that Shivam was not in a good state of mind for the last couple of months. Investigation is going on to ascertain the reason. 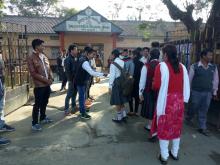 16 Feb 2018 - 11:57am | AT News
GUWAHATI: Amid an unprecedented security bandobast, the High School Leaving Certificate Examination and High Madrasa Examinations 2018 begin on Friday across the state. Altogether 3,44,190 candidates...