A 12 hour Assam bandh has thrown life out of gear across the state on Friday. Roads started wearing a deserted road. Shops and markets, schools and colleges remained closed under the impact of the Bajrang Dal sponsored bandh which began at 5 in the morning.

Government offices witnessed think attendance as the employees, mostly, could not attend the offices because of skeleton ASTC services. Police arrested at least 150 bandh supporters across the state when they tried to block the vehicle movement by burning tyres on the roads.

Several others forced the businessmen to down their shutters till the evening. Such incidents have been reported from Baihata Chariali, North Kamrup, Morigaon, Jorhat, Sivasagar and Tezpur. Bajrang Dal called bandh the in protest against AIUDF president Badaruddin

Ajmal’s alleged link with fundamentalist forces in Bangladesh. The alleged nexus came to light when a satellite channel beamed the story citing an old and controversial intelligence report.

Jintul Talukdar adds from Barpeta: The 12 hour bandh heavily disrupted the normal life in the entire district. All schools and colleges along with the government and private offices remained unattended on Thursday. 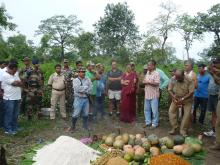 7 Jun 2015 - 11:18am | Jayanta Kumar Das
World Environment Day was observed in various places of Bhergaon sub-division in Udalguri district on June 5 with variety of programmes. In Bornadi Wildlife Sanctuary near Indo-Bhutan border,the day...

20 Apr 2012 - 1:11am | editor
ASHA (Accredited Social Health Activist) a trained female community health activist selected for every village with a population of 1000 is one of the key strategies under the National Rural...