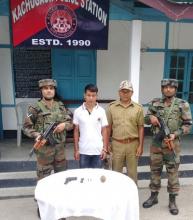 7 Apr 2016 - 7:37pm | AT Kokrajhar Bureau
One NDFB-Songbijit cadre was arrested at a joint operation launched by army and police at Takampur area under Kachugaon PS on Thursday in Kokrajhar district. The rebel was identified as Raju...

11 Feb 2012 - 7:19pm | Nava Thakuria
India as a largest democracy in the globe may be a prime source of inspiration for many other nations, but the country is itself facing crisis in many fronts. The deepen crisis of governance...

21 Mar 2017 - 6:43pm | AT News
As many as ten people are believed to have lost eye sights after they underwent a government sponsored cataract surgery in Nagaon district recently leaving the health department in a state of...