Chief Minister Tarun Gogoi ordered probe into the LPG pipeline blast that killed four people in Sivasagar district on Monday. In a statement, Gogoi said that the inquiry would help ascertain reasons for the explosion and find out if there were any lapses on the part of the company. The chief minister further announced Rs 5 lakh as ex-gratia grant to the next of kin of those killed and Rs 50,000 to those seriously injured. v/ 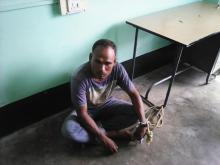 30 Jun 2012 - 11:52pm | editor
The two month long kidnap drama in Goalpara district came to a tragic end when police recovered the bodies of two teachers on Sunday more than a month after they were kidnapped along the Assam-...