The Asom Gana Parishad leaders stage dharna in front of the Assam Assembly on Monday in protest against the retain the Bangladeshi vote bank by Congress government in Assam and the BJP-led government at the Centre.

AGP legislators also join the dharna along with other leaders demanding immediate halt in the move for asylum to the Bangladeshi immigrants who came to Assam after 1972. 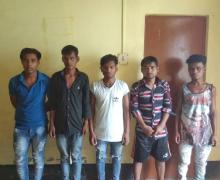 7 Jul 2018 - 7:57pm | Shajid Khan
TANGLA: In a major sucess for Tangla police apprehended five members of a gang of notorious petty thieves from Tangla weekly market on Friday. Acting on a tip off, a team of Tangla police nabbed...

16 Aug 2015 - 8:25am | Jintul Talukdar
Three persons who sustained serious injury in Barpeta lightening on Saturday are battling for life at the Gauhati Medical College Hospital.At least fifteen others have been undergoing treatment at...