Normal life in many parts of Guwahati has come to a grinding halt following massive water logging from Saturday night after heavy downpour lashed the city for several hours.

Parts of the busy RG Baruah Road and GS Road have come under the artificial flood causing much inconvenience for the people following the incessant rains.

The massive waterlogging further results in traffic snarl in several parts of the city. The worst-hit areas include Chandmari, Silpukhuri, Anil nagar, Lachit Nagar, Nabin Nagar forcing the local residents to remain confined to their homes. 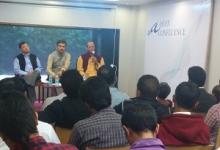