A lower court in Jorhat district has issued an arrest against a Congress MLA in connection with a case where he assaulted a policeman last year.

In an order issued after hearing a case of assault on a policemen August last year, the court has asked the police to produce the MLA before the court on May 23.

Kurmi’s lawyer, however, is preparing to move the Jorhat CJM Court challenging the order.

The court order was issued after police chargesheeted the Congress MLA and his PSO for assaulting a policeman on the street.
/

5 Jun 2016 - 10:21pm | AT Kokrajhar Bureau
A massive prepartaions have got underway to hold the 8th edition of ‘Bodousa Cup’ in four clusters all over the state which has been scheduled to be held from June 26 next. Speaking the reporters at...

17 Jun 2014 - 11:49am | AT News
Chief Minister Tarun Gogoi pulls up his sleeves to reshuffle his council of ministers in a day or two. Gogoi, who is camping in New Delhi is believed to have got the seal of approval from Congress... 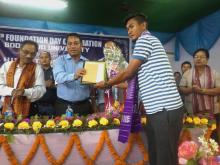 Bodoland vasity on throes of crisis

13 Jul 2016 - 3:12pm | AT Kokrajhar Bureau
Bodoland University(BU) authority alleged that the university has been deprived from 12(B) status from University Grants Commission(UGC) due to non-appointment of Professors in the univeristy from...