Guwahati had a narrow escape from yet another huge explosion after police recovered some explosives in the city.

During a search operation on Saturday midnight, the Bharalumukh police seized some explosives from the possession of five persons who were camping in the Santipur hills side.

These include gelatins and wire brought for the use in the explosions by the youths who hailed from Chayagaon area in the outskirt of the city.

Police brought them to the Bharalumukh station where interrogation is going on.

19 Feb 2014 - 9:23pm | Nava Thakuria
Journalists' Forum Assam (JFA) has condemned the incident of physical assault to Anup Sharma, a city based journalist and Pronib Das, a Dibrugarh based photojournalist today by a group of unruly... 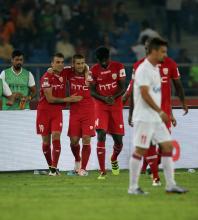 27 Jan 2014 - 9:03am | AT News
APCC poll panel will meet on Monday to prepare panels of candidates for each of the Lok Sabha constituencies.Internal observers are expected to submit their findings on Monday on the winnable...