Senior citizens in Guwahati have alleged a nefarious political conspiracy behind the bloodbath in BTAD where at least 33 people lost their lives during the last 36 hours.

After holding a meeting at the Guwahati Press Club, noted intellectual Dr Hiren Gohain said that the authority has straightly blamed it all on NDFB-S. But, according to Dr Gohain, it was not convincing.

Attended by Left veteran Hemen Das, Professor Akhil Ranjan Dutta, senior journalist Nitya Bora, the meeting appealed to all section of the societies to remain calm in this hour of crisis. 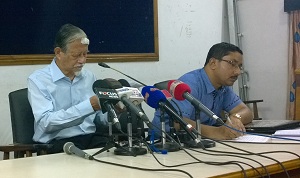 28 Jun 2010 - 5:23pm | DigantaTalukdar
During a public meeting, where Assam Chief Minister Tarun Gogoi attended in Nagaon,Assam (India) on sunday, some Assam based national and state level photo journalist faced misbehave from a...

7 Feb 2015 - 10:58am | AT News
Much to a major boost for the rehabilitation of the Adivasi carnage victims in Kokrajhar and Sonitpur districts, Tripura CPM has collected Rs 16.92 lakh.According to party leaders, the entire amount...