Festivity seems to have gathered momentum when the Ronagli Bihu entered second day on Tuesday. The entire state is throbbing with the sounds of Bihu Huchoris a day after the people observed the Goru Bihu with traditional cattle worship on Monday.

Bor Bihu falls on Tuesday and the celebrations are getting quite colourful and vibrant. Donning  traditional dhoti, gamosa and saadar mekhela, the young boys and girls are visiting every households in the rural areas to perform Bihu huchoris.

Bor bihu marks the New Year of the Asamese calendar. The temples and namghors are teeming with the people seeking divine bliss to help them remain happy.

The festival is being celebrated with greatest excitement singing traditional Bihugeets and performing group folk dances.
The joyous people ---old and young are wearing new and colourful clothes.

They are visiting their near and dear ones to be served larus and pithas to greet each other a Happy Bihu.

8 May 2015 - 9:38pm | Hantigiri Narzary
Hundreds of students activists from Kokrajhar district unit of AASU carried out a torch light rally in protest against land swap deal on land boundary agreement this evening in Kokrajhar town.The... 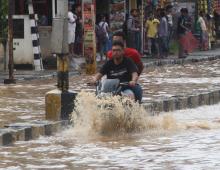