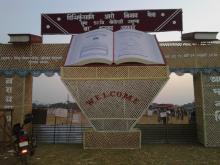 18 Oct 2012 - 2:17am | Anup Biswas
The Jadikhe Naisho Hosom, Dimasa Apex body, which was the instrumental in the peace accord appealed to the people of Dima Hasao irrespective of caste creed, religion to cooperate with in maintaining...

22 Mar 2014 - 12:45pm | Hantigiri Narzary
Three people are believed to have been killed in the name of witch-hunting in Kokrajhar.The incident took place on Thursday in Mongoljhar where the three people including a woman have been remaining...