Bhaskar Jyoti Chakravorty student of Assam Don Bosco University, Don Bosco College of Engineering and Technology at Azara, died, Thursday morning at Hyatt Hospital Guwahati. On his way home from College on Wednesday evening while turning at a median opening close to the college on NH 37 he was knocked off his motor bike by a rope that was put across due to VIP movement.

Rushed to the hospital and kept in ICU Bhaskar, 21 years, died Thursday morning.

He was a student of B Tech 2nd semester Mechanical Engineering at DBCET.

During a 20 minute memorial prayer service at the morning assembly on Thursday, Vice-Chancellor, staff and classmates shared memories of Bhaskar and prayed for the repose of his soul and bereaved members of the family. The classes were adjourned for the day.
Soon after the assembly Bhaskar's photo came on the digital display screen and students stayed back in clusters recalling memories of Bhaskar.

Bhaskar is the son of Dilip and Bhanita Chakravorty of Gandhi Basti, Guwahati.
Bhaskar's mentor at ADBU Asst. Prof. Pallav Gogoi remembers him as "obedient, adventurous and highly polite student."

Salesian Brothers and B Tech students in the Carrenno Hostel at Azara organized a short prayer service for their batch mate Bhaskar with the lighting of candles, recitation of prayers, rendering of songs and recalling his memory as a final tribute to the departed. 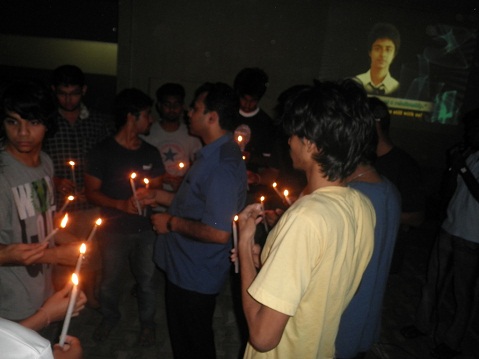 16 Apr 2015 - 1:34pm | AT News
Delhi police are seeking transit remand of Anil Chauhan in connection with a number of car lifting cases three days after the car lifting kingpin was caught in Guwahati.A team of Delhi Police...

18 Feb 2014 - 10:19pm | AT News
It’s a rare does of good news for around 4 lakh state government employees. Courtesy Dispur. But in the run up to the Lok Sabha polls.Chief Minister Tarun Gogoi on Tuesday agreed to release arrear...

10 Mar 2015 - 8:37pm | AT News
The opposition parties claimed to have seen nothing new in the state budget 2015-16.Hours after Chief Minister Tarun Gogoi tabled the budget on the floor of the House on Tuesday, AGP leaders told...