National Santhal Liberation Army’s role suspected in the Gossaigaon shoot out where three construction workers were killed on Wednesday.

The militant outfit is believed to have attacked the bridge construction project for failing to meet the extortion demands.

According to sources, the contractor did not meet the extortion demand by the outfit and the shoot out is believed to be its fall out.

The incident took place at Kochugaoon Borbzar area at around 11-30 in the morning  when three motorcycle born youths halted and started firing indiscriminately at the workers engaged in the bridge construction site. 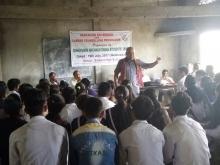 2 Jun 2015 - 11:24am | AT News
In a huge respite, Rumi Nath is out of jail on Tuesday a day after the Gauhati High Court granted her bail. The Borkhola MLA procured bail by a division bench of the high court on Monday along with...