Chief minister Tarun Gogoi on Friday called BJP a balloon to be air-pumped in the time of elections.

Campaigning for Bijoy Krishna Handique at a meeting in Sivasagar, the chief minister said that the balloon-like BJP is punctured after the election.

He said that the voters will take into consideration what the Congress governments in Delhi and Dispur have done during the last ten years.

In the same breath, he hoped that the people should pause and ponder over what they got during the NDA tenure in Delhi and AGP tenure in Dispur.

He said that he was confident that Congress candidate BK Handique will win the polls from Jorhat. 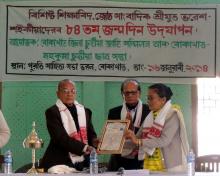 GMC not likely to succeed in handling its responsibility?

19 Oct 2009 - 1:25am | Daya Nath Singh
It is more than a year, when use of tobacco products and smoking were banned in the public places throughout the country. Though a few law abiding people have made it their habit in their life, the...

28 Apr 2016 - 9:41am | Shajid Khan
In a kidnapping case where two youth Amin Ali(25) and Shankar Das (28) went missing after both of them left for Goreswar from Tangla railway station on Sunday last. The same day the family members of...