Accompanied by forest minister Rockybul Hussian, food and civil supply minister Dr Nazrul Hussain, PWD minister Ajanta Neog along with thousands of his supporters, the chief minister’s son filed his papers at 11-30 in the morning.

Earlier, Gogoi along with his wife Elizabeth Callburn and mother Dolly Gogoi were taken to the Nagaon DC office premises at a specially decorated vehicle from the Rajib Bhawan. 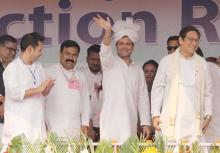 26 Mar 2019 - 11:12am | Rajiv Roy
Can anyone advice Rahul Gandhi (RaGa) that what he and the other nincompoops of the Indian National Congress (INC) are doing in the name of electioneering campaign by targeting the defence forces of...

26 Mar 2015 - 9:13pm | AT News
Despite preventive measures, there has been steep rise in the number of death due to Japanese Encephalitis in the state.Disclosing this in the assembly on Thursday, health minister Dr Nazrul Islam...