Thousands of people hit the streets in Tezpur on Tuesday alleging failure to arrest the Chauldhuwa culprits who mowed down 15 villagers in January end.

With banners and festoons over one thousands of people representing 12 organizations took out a protest procession in the town.

They further submitted a memorandum before the district administration to expedite the process to bring the Chauldhuwa culprits to book apart from clearing the compensation to the victims’ family members. 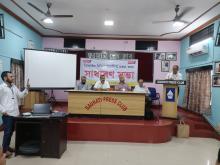 11 Aug 2022 - 9:11am | Nanda Kirati Dewan
Guwahati: The newly formed Digital Media Journalists Forum, Assam  held a general meeting at the Guwahati Press Club on Wednesday.  The meeting was chaired by the president of the Convening...