21 Mar 2018 - 9:42am | Nikhil Mundra
HOJAI:"Gangaur" the  18 days festival concluded on  Tuesday  with the immersion of statue' s of  Lord Shiva and Parvati at Shivbari Ghat in Hojai. This Puja is mainly done by the... 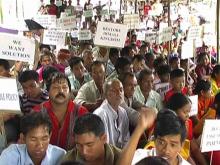 1 Dec 2015 - 7:25pm | Hantigiri Narzary
The World AIDS Day was organised in Kokrajhar with various awarness programme among the public. The Discovery Club, a Kokrajhar based NGO observed the day by organizing a mass campaign on the...