3 Aug 2017 - 8:19am | Raktim Baruah
Professor Srinath Barooah, founder vice-chancellor of Krisnakanta Handiqui State Open University (KKHSOU), has denied allegations of financial and other irregularities, leveled against him by his...

11 Sep 2015 - 8:19pm | Suryya Kumar Chetia
Assam Women’s University(AWU)  which is located at Rowriah, Jorhat celebrated its first foundation day on 11th September, 2015. The University which began its journey on the 11th of September... 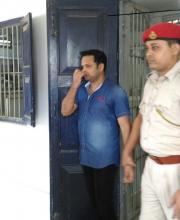 26 Aug 2017 - 2:26pm | AT News
The Nagaon police probing the recent attack on the former ULFA rebels captured yet another youth on Saturday.  Identified as Rajiv Chakravarty, he was held from a house in the Ambari area...