AICC is likely to announce the remaining three candidates on Monday.

Junjonali Baruah will be the party’s candidate for Nagaon while Wzed Ali Chaudhury will contest from Dhubri to face AIUDF president Badaruddin Ajmal.

Talking to reporters in New Delhi on Sunday, chief minister Tarun Gogoi said that AICC election committee has yet to finalize the candidate for Mongoldoi seat.

Notably, the party has announced candidates for 10 seats on Saturday. 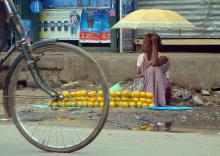 9 Jan 2013 - 2:14pm | Benjamin Kaman
Rural agricultural marketing in North East India is still unorganised and in a poor state though the wheel of time has changed the overall marketing scnerio with trendy adsvertisings.

6 Sep 2015 - 8:48am | AT News
Two crucial meetings of Congress topguns are believed to have finalized strategy to stop exodus of sitting MPs to BJP. Chief Minister Tarun Gogoi convened the late night meeting at his residence at...

24 Nov 2014 - 2:42pm | AT News
BJP is gearing up for the 2016 Assembly polls. The party pins hopes on prime minister Narenda Modi’s initiatives to steal the show.During his upcoming north eastern visit, the prime minister will...