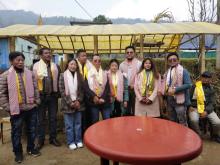 7 Mar 2022 - 3:54pm | CM Paul
In a post-covid outreach effort to connect with the local community, Radio Salesian journalists made their first attempt and reached one of the far-flung tea garden in Mirik Sub-Division, some two...