NEW DELHI: The Supreme Court on Monday extended by a months its 30 June deadline for the publication of the final National Register of Citizens (NRC) draft. The bench gave the extension after the Centre and the state NRC coordinator agreed to publish it within the new 30 July deadline. A bench of justices Ranjan Gogoi and RF Nariman considered the report of Assam NRC coordinator Prateek Hajela and extended the deadline. Last week, Hajela had said it would not be possible to release the final draft of the NRC on 30 June because of the floods in Cachar, Karimganj and Hailakandi districts in the Barak Valley as well as in parts of Karbi Anglong and Hojai.

The court on Monday asked the state chief secretary and director general of police of Assam to immediately provide adequate security to Hajela and his family, including his children, in view of his work, and file a compliance report. The top court said it will consider all interlocutory applications and other related matters at the next hearing on 31 July.

17 Feb 2019 - 8:40pm | Akshaya Pranab Kalita
People in the Namrup daily bazar paid their homage to the Pulwama martyrs.  The programme was organsied by daily bazaar shop keepers assoctiation and local people of the area. 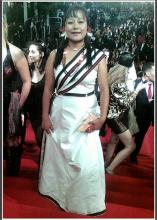