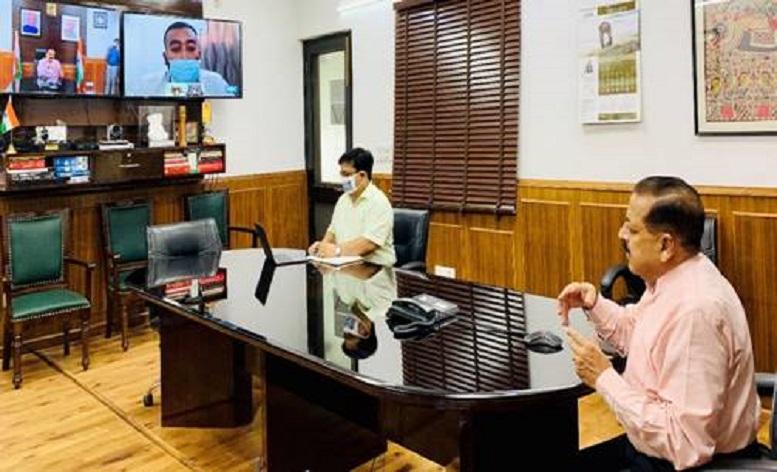 Guwahati: North East, the abode of immense resources is set to get a fresh lease of life on its economic sector. The engine of economic activities has started changing its track which was tedious over the years. Now it would be faster like never before. Entrepreneurship is going to be the stock in trade of the state’s economic activities in the time of COVID19 endemic.

These are more or less of what Union minister of state for development of north eastern region (DoNER) Dr Jitendra Singh said as he was interacting with a team of officials led by Managing Director Manoj Das of North Eastern Regional Agricultural Marketing Corporation Limited (NERAMAC) accompanied by a group of farmers in a video conference.

The minister admitted the potentials across the entire landlocked region and stressed a viable mechanism to harness these to help the agriculture and horticulture based economy. According to him, “lucrative offers for setting up industries like fruit concentrates and juice plants were received and the same can be executed at the earliest.”

He suggested Das and his team of NERAMAC to promote an era of profitable enterprise to get rid of the COVID19 blues in the economic sector. The speakers, more or less, agreed to figure out the unique products and through their branding and sale in markets outside the region to the rest of the nation. NERAMAC is now preparing a roadmap for the same.

Notably, NERAMAC is now throbbing with economic activities with bountiful of resources in the form of fruits, spices and other unique agro products. If this tempo keeps intact, NERAMAC would hold the key in the region’s economy. NERAMAC has increased its turnover from Rs 2 Crore in 2018-19 to Rs 20 Crore in 2019-20 while it has set a target of Rs 200 Crore in the next 5 years.

The Union minister thanked Das and his officials for helping the farmers through procurement during the lockdown period and thus avoiding distress sales. But in the same breath, he told the officials to boost their area of activities.

6 Dec 2010 - 4:07am | Ritupallab Saikia
In a bizzare incident involving CRPF, one CRPF jawan was killed and another was critically injred when an exchange of fire took place between themselves. The incident took place at around 8.00 PM in...