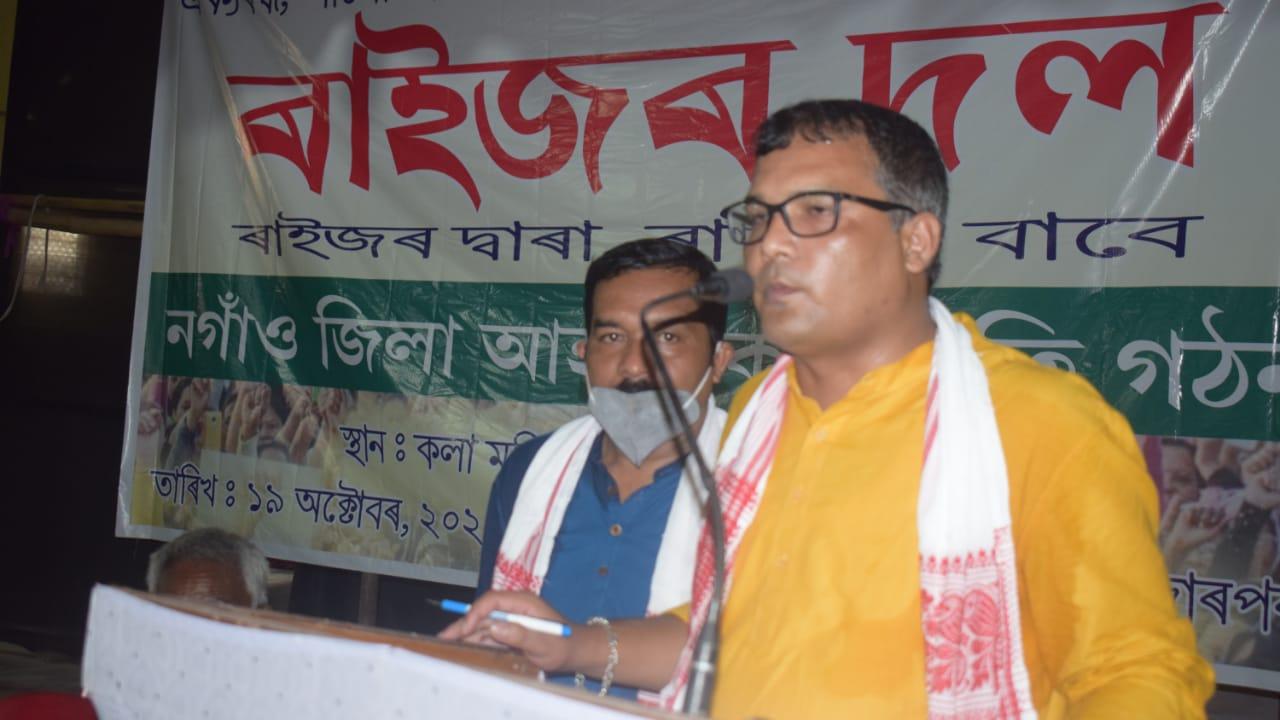 Last year when the protest against the Citizenship(Amendment) Act had reached its zenith in Assam, the then AASU general secretary, Lurinjyoti Gogoi, in a gathering announced that prevailing situation was conducive for forming a new regional political party that could fulfil the hopes and aspirations of the indigenous people of the state. This year's summer the people of Assam witnessed two new influential political parties, floated separately by some pressure groups namely the All Assam Students' Union(AASU) and the Asom Jatiyatavadi Yuva Chatra Parishad(AJYCP), and the Krishak Mukti Sangram Samity(KMSS) and its allied non-political organizations.

The AASU and the AJYCP have jointly formed the political party known  as the Asom Jatiya Parishad(AJP). The Raijor Dal is the other new political party floated by the KMSS and its allied organizations. However, their well-wishers that include some Assamese intellectuals are apprehensive that no party could unseat the BJP-led front from the power in Assam, if the Opposition parties contest separately in the state assembly elections scheduled to be held in 2021. Many people are seen advising the newly formulated regional parties to make a pre-poll alliance between them. Even some have suggested the leaderships of the AJP and the Raijor Dal to form alliance with the Congress and the AIUDF, led by Badaruddin Ajmal. In the meanwhile, the Congress and the AIUDF did a pact to fight jointly in the upcoming assembly elections. These had jointly contested the recently concluded the Bodoland Territorial Council elections. But the election was seen a blow to the both parties as these won only one seat out of total 40.

Girishankar Goswami, the state chief convenor of Raijor Dal, in an exclusive chat with this writer, categorically stated that they would not form any alliance with the Congress and the AIUDF under any circumstances. But he has hoped that the Raijor Dal is hoping to form an alliance with the AJP before the upcoming assembly polls. “ During the six-year-long Assam Movement, more than eight hundreded protestors lost their lives in the police atrocities. Then, the Congress was in the government. So, how could we form an alliance with such a party?”, Goswami added. He has also termed the BJP and the AIUDF as communal parties. The young political leader has also claimed that they have support of the 90 percent indigenous people of the state and tried to translate their support into votes. “We have a strong support base in both the valleys in the state, i.e. the Brahmaputra and the Barak. We hope  to fight in the upcoming elections jointly with the AJP”, the leader further said.

It can be noted that the Asom Gana Parishad(AGP), which ruled the state twice was formed in 1985 after the end of the  historic Assam Movement. But it failed to fulfill its promises given to the indigenous populace of the state. In the 2016 Assam assembly elections, the AGP formed alliance with the BJP and won 14 seats out of the total 126. But this time the regional party has been facing the most indigenous people's ire.

5 Aug 2014 - 9:03pm | AT News
The Centre is hopeful. It wants an end to the three year long impasse over the NHPC-owned power project in Gerukamukh along the Assam-Aunachal Pradesh border. Addressing a function in New Delhi on...