27 May 2015 - 5:03pm | AT News
The parliamentary committee of home affairs shall personally look into the matter for the development of the North East Region. This was what the delegation assured FINER at a meeting in Guwahati on...

21 Sep 2019 - 11:22pm | AT Kokrajhar Bureau
KOKRAJHAR,SEP 21: "United People's Party Liberal (UPPL) is fully prepared to contest the upcoming BTC general council election to be held next year. There is no word of unification with ruling BPF... 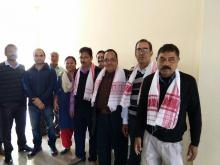 23 Dec 2016 - 9:31am | AT Kokrajhar Bureau
The Assam Power Distribution Company Limited(APDCL) has been losing 2 crores daily due to incurring of power from other agencies as well commercial loses across the state. On the other hand,a newly...
Follow @Assam Times