Guwahati: The city based scribes maintain good health as most of them have performed well in a recent blood screening camp conducted by Assam’s celebrated healthcare institute Dispur Hospitals. Nearly 80 scribes, age limit from 30 to 60 years, participated in the free camp, where their blood samples were collected to test thyroid, haemoglobin and sugar.

Only 11 scribes were diagnosed with high thyroid stimulating hormone (more than 7 milli-international units per liter or mIU/L), where four participants were with low haemoglobin (less than 12 gm/dl) and five with high random blood sugar (more than 140 mg/dl), said a statement from Guwahati Press Club, where the camp was organized last week. Dr Jayanta Bardoloi, managing director of Dispur Hospitals offered free consultations to the participating member-journalists, so that they can start medication in need. Interested scribes may arrive at his hospital in Ganeshguri locality of the city for necessary consultation and medications. 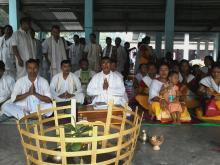 1 May 2014 - 3:33pm | AT News
In a bizarre incident, a person from Lakhimpur was found dead inside the room of a hotel in Guwahati on Thursday. Identified as Guneswar Chutia, the resident of Naoboisa landed at the Hotel Greenland...

19 Sep 2014 - 10:19pm | AT News
Come June 2015. The gas cracker project would be operational. This was what Union fertilizer minister Anant Kumar said after he reviewed the progress of the Rs 10,000 crore project on Friday.Kumar...
Follow @Assam Times