AT News: Shiv Sena has filed a plea in SC against the governor&#039;s decision …

27 Jan 2014 - 6:32pm | AT News
The deadlock over water supply refuses to die down even 12 hours after the entire Guwahati city plunged into a dearth of potable water. The situation is expected to improve only after the next 72... 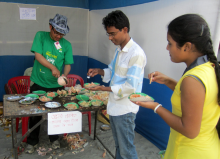 3 Mar 2013 - 2:43pm | AT News
Dr Buljit Buragohain selling Robab Tenga at the on going Jeevan Kite Festival at the bank of the Brahmaputra river, Guwahati.

30 Jul 2019 - 9:03pm | AT News
Guwahati: Journalists’ Forum Assam (JFA) expressed concerns over incidents of attacks on scribes across the country and urged the concerned authorities to investigate the motives behind those...