Many KMSS activists have staged five hour long dharna at Gorchuk area in the city demanding immediate release of Akhil Gogoi who was arrested on Sunday along with five other leaders.

Talking to Assam Times, led by Pramod Boro’s wife Purnima Boro, the protestors said that the agitation would not halt until and unless Gogoi is released.

They further blocked a road by burning tyres in protest against the arrest of KMSS president. 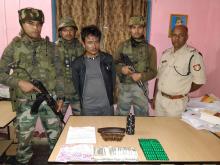 24 Mar 2018 - 9:22pm | Akshaya Pranab Kalita
Namrup: Army’sDAO Division based in Sonari claimed to have held an ULFA(I) linkman on Saturday.Identified as  Bijoy Lama, a local resident of Namtola, he was held during an operation who has...

We would improve tally: Gogoi

8 Nov 2015 - 9:56pm | AT News
Hours after JD(U) and RJD took a huge lead in the Bihar assembly polls, Assam Chief minister Tarun Gogoi said that the Bihar verdict would help Congress win the next assembly polls with flying...

Beefed up security in Guwahati for puja

12 Oct 2012 - 4:00am | editor
Security has been beefed in Guwahati in the run-up to the Durga Puja next week. Policemen are working at various levels and have carried out risk assessments. Additional forces have been sought...